Skip to content
What can we help you find?
Top searches
Home / Blog / People Coming Together For Just Say Hi Campaign and CP

To commemorate the Cerebral Palsy Foundation’s (CPF) 60th anniversary this past October, the organization launched an exciting new campaign.

Coined the “Just Say Hi” campaign, the company aims to address the unnecessary hesitation or awkwardness that some people feel around individuals with a disability.

The campaign features video clips from an array of celebrities and inspirational figures who have all gathered to show their support for the 17 million people in America that live with CP. Cerebral palsy (CP) is also the most common disability among children, with one child every hour being born with CP.

The question the campaign poses is:

What is the best way to approach a conversation with someone who has a disability?

Responses ranged from funny to heartfelt to thought-provoking. Pop culture stars, NFL players, businessmen and government officials all weighed in. Some have disabilities themselves, some have loved ones who do. All echoed the same sentiment — people with disabilities are still just people, and there’s no reason to treat them differently.

Here are some of our favorite responses to the Just Say Hi campaign: 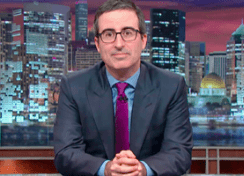 “Maybe let’s start with what not to do. Don’t: mumble or stare or blurt out an intimate detail from your own life. And, whatever you do, don’t speak extra loud as if you think being in a wheelchair is somehow the same as wearing noise cancelling headphones. Frankly, those aren’t particularly good ways to start a conversation with anyone.”

Victor Calise, NYC’s Commissioner for the Mayor’s Office for People with Disabilities

“CPF asked me if there are any issues with having a conversation when you’re in a wheelchair. Well, looking up every now and then does get tiresome. But hey, that’s true for anyone that worked for [6’5”] Mayor de Blasio.” “At Apple, we believe inclusion inspires innovation, diversity gives us strength, and that includes people with disabilities.”

Naturally, Cook then poses the question of what the best way to approach a conversation with someone who has a disability is to Siri, to which she responds in her infamous robotic tone: “It’s easy. Just say ‘Hi.'”

“The CPF asked me for ideas about how to start a conversation with a person with a disability. Well, for me you could either stand up or get down on one knee if you’d like. But please don’t propose -- my husband would get very upset.” “The CPF knows that I have CP, so they asked me if there are ways particularly that I like that people start conversations with me. There are a couple; one is ‘Hey I’ve seen some of the games that you do, you do a great job’. Another is, ‘Wow, you’re hot in person!’”

“The CPF knows that I have a brother with CP, so they asked if over the years I ever saw people having a tough time getting acquainted with him. You know, yeah, sometimes just the look in their eyes, it’s like they had a 350-pound lineman coming at them. I can promise you, it’s nothing like that. Getting acquainted isn’t all that hard — just say hi. Hey, love you big bro!” “Today technology has enabled us to connect and communicate with others in new ways. Sometimes fostering a connection is as simple as starting a conversation. The CPF asked for tips on having a conversation with people with disabilities. To me, the easiest way to start is to just say hi.”

“The Cerebral Palsy Foundation asked if there’s anything special I do when I talk to a group that includes people with disabilities. No, no not really.  I just sit here on my couch, with a few cameras rolling and a few hundred thousand people watching. You know, typical morning stuff. It’s all pretty simple – just say hi.” Oftentimes, the hardest part of living with a disability is having to face stares from strangers or hearing the hesitation in someone’s voice as you approach them.

Richard Ellenson, CEO of CPF, described the purpose of the campaign: “The Cerebral Palsy Foundation’s mission is to transform the lives of people with cerebral palsy today. It’s a fact of life that people with disabilities have challenges most of us can’t fathom. While [this campaign] only scratches the surface of all we can do, it’s a simple and impactful first step.”

Instead of overthinking this interaction, it seems that the best way to approach a conversation with someone who has a disability is surprisingly simple: just say hi.

Join the conversation online by using the hashtag #JustSayHi or download the Just Say Hi app for iOS or Android.