Cerebral palsy is typically diagnosed 18 months or more after a child is born because the signs and symptoms aren’t immediately obvious.

About 70% of cerebral palsy cases result from a birth injury. Was your child one of them?

The symptoms and signs of cerebral palsy start appearing at different ages for each child. Some risk factors, such as extremely premature birth, may point to cerebral palsy in the future. However, it’s not until children fail to reach developmental milestones that providers may begin testing for CP.

It is important to make a complete diagnosis of the specific type of cerebral palsy that your child has, to get the right kind of treatment. This includes diagnosing the spectrum of conditions (behavioral disorders, speech impairment, etc.) that may accompany it.

Parents usually first notice a problem when their child isn’t meeting developmental milestones, like sitting up or walking. If physicians suspect cerebral palsy, they will observe the child’s development through routine appointments until they feel specialist referrals are necessary to make an accurate diagnosis.

Diagnosing cerebral palsy isn’t a straightforward process. It requires careful monitoring in the first years of development. Children are generally screened intermittently for developmental disabilities at 9, 18 and 24 months.

Pediatricians watch for delays in key areas of motor function, such as:

How soon can a diagnosis be made?

Imaging tests used on children who may have cerebral palsy include:

An MRI produces a three-dimensional image of the brain and can reveal abnormalities that are contributing to motor function problems. The process can take up to an hour and MRIs are generally regarded as a safe and painless procedure when used in children.

The MRI scanner is a large, oval-shaped magnet that is hollow in the center. Patients will be placed on a table that slides into the tunnel, where the tests are completed. Doctors will be able to view 3-D, black and white images of the brain or body.

MRI testing is used to check for any neurological irregularity in children who may be exhibiting symptoms of CP. MRI tests can also be used to determine the cause of the cerebral palsy.

CT scans take cross-sectional images of a child’s brain. The scan takes roughly 20 minutes and it is used to detect and diagnose cerebral palsy. CT scans can help to eliminate any other conditions or diseases that have symptoms similar to CP. This scan can be used to detect things such as bleeding in the brain, skull fractures or other related brain conditions.

CT scans can also help determine the cause and time of a brain injury that led to the development of cerebral palsy. The results of a CT scan appear similar to an x-ray and feature pictures of all different angles to allow for a clear examination of various organs and tissues. 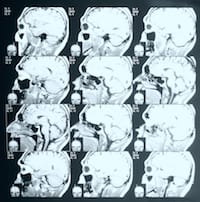 This imaging test isn’t as detailed as an MRI or CT scan, but it is often used because it is quick and easy for the patient. Cranial ultrasounds may provide evidence of an infant’s likelihood of having cerebral palsy by allowing doctors to see an image of the brain tissue. This technique uses an ultrasound probe to send high-frequency sound waves through the brain and is considered pain free.

Cranial ultrasounds reveal bleeding in the brain and other conditions that can lead to a diagnosis of CP. Doctors use cranial ultrasounds to capture subtle changes in white matter, which is the type of brain tissue that is damaged in cerebral palsy.

An EEG measures the electrical activity of the brain. Children with seizures have distinct electrical patterns in their brain. Doctors use an EEG to diagnose epilepsy by recording those patterns.

During an EEG, patients will have a series of electrodes attached to their scalp so that the electrical energy can be measured. Due to the correlation between cerebral palsy and epilepsy, if a doctor determines that a child has epilepsy using this testing, this may increase the chances of a diagnosis of cerebral palsy.

Other tests for children with CP

Doctors should always perform a complete assessment of their patients. On top of standard imaging tests, doctors may conduct other evaluations for conditions that often accompany cerebral palsy, such as intellectual disabilities. It’s important to have the whole picture so the child can get effective treatment and care.

Some of these tests include:

Doctors may also require blood tests to rule out hereditary conditions that affect motor function in children who might have cerebral palsy.

Diagnosis by level of severity

Cerebral palsy is also classified by severity. The levels of severity are roughly defined as mild, moderate or severe. Classifying the type of cerebral palsy paints a near-complete picture of how a person is affected by their disability.

The Gross Motor Function Classification System (GMFCS) is often used to diagnose the severity of a child’s motor impairment. Doctors can also use the GMFCS to make a prognosis and determine the likelihood of a child improving their gross motor skills (sitting without support, walking, etc.).

The GMFCS has five levels of motor impairment from least severe (Level I) to most severe (Level V). The level of severity a child is initially diagnosed with, can be a prognostic indicator of their future motor skills.

GMFCS - the 5 levels of severity in cerebral palsy

The need to reclassify the level of severity grows as the child gets older as motor ability changes over time.

The chart below is based on a study published in The Journal of the American Medical Association. It shows the approximate age when motor development begins tapering off. It is based on a child’s initial level of motor function impairment, as defined by the GMFCS. For example, a child diagnosed with Level II motor impairment has the most potential to develop motor skills up to the age of 4 1/2 years old.

Approximate age motor potential Is reached based on GMFCS

Children reach most of their motor development potential early in life. For children with cerebral palsy, the severity of their condition limits this potential. For example, a child with Level IV movement problems may learn to sit unsupported by 3 years old, but their motor development is likely to taper off at this age. A child with Level II movement problems, however, may sit by 18 months old and eventually start walking before their motor function potential is reached.

Developmental disorders like cerebral palsy are hard to diagnose. Younger children have a higher capacity to heal, and there are many children who fully recover from developmental problems caused by brain injury.

Additionally, early diagnoses of cerebral palsy are difficult to make because it’s hard to differentiate between the signs of CP and the normal reflexes of a developing child. It’s also harder to detect CP in children whose condition is mild because very young children and those with CP both lack motor control and coordination. Therefore, observing the development of the child’s motor skills is the first step toward making a diagnosis.

Common reasons why cerebral palsy is hard to diagnose include:

Paying close attention to a child’s delays in motor control is important to rule out any other disorders that look like cerebral palsy in the first months of life. For example, transient idiopathic dystonia (irregular flexing of the arm most commonly) often occurs in prematurely born babies. Infants with transient dystonia have movement issues very similar to infants with CP, but transient dystonia usually resolves by age one.

Doctors are generally hesitant to make a diagnosis of cerebral palsy because it shares many symptoms with other conditions. Doctors try to avoid putting more stress on the parent until they are sure the problem is cerebral palsy

What to do if you think your child has cerebral palsy

If your child seems like they are falling considerably behind developmental milestones, it is up to you to find a specialist who can investigate the cause.

If you are concerned your child may have cerebral palsy, some early steps you can take to get a faster diagnosis are:

Even though it’s hard to diagnose cerebral palsy in the first nine months, it is important to discover if a child has cerebral palsy as soon as possible. The sooner a diagnosis is made, the faster a treatment plan can begin. Learn more about finding a specialist who can help diagnose your child in our free Cerebral Palsy Guide.

Get Answers to Your Questions
I'm here to help!Have questions about your child’s birth injury?